Invasive plants are categorized as invasive because they are not native to our region. Many times, settlers brought the plants from another continent and added them to gardens and landscapes. One of the reasons that invasive species are able to succeed is that they often leave their predators and competitors behind in their native ecosystems. Without these natural checks and balances, they are able to reproduce rapidly and out-compete native species.

Why should you care?

Invasive plants often destroy the native plants that native pollinators and other animals depend on for survival.

How can you help?

The longer we wait, the more expensive it will be to control. We are all in this together! 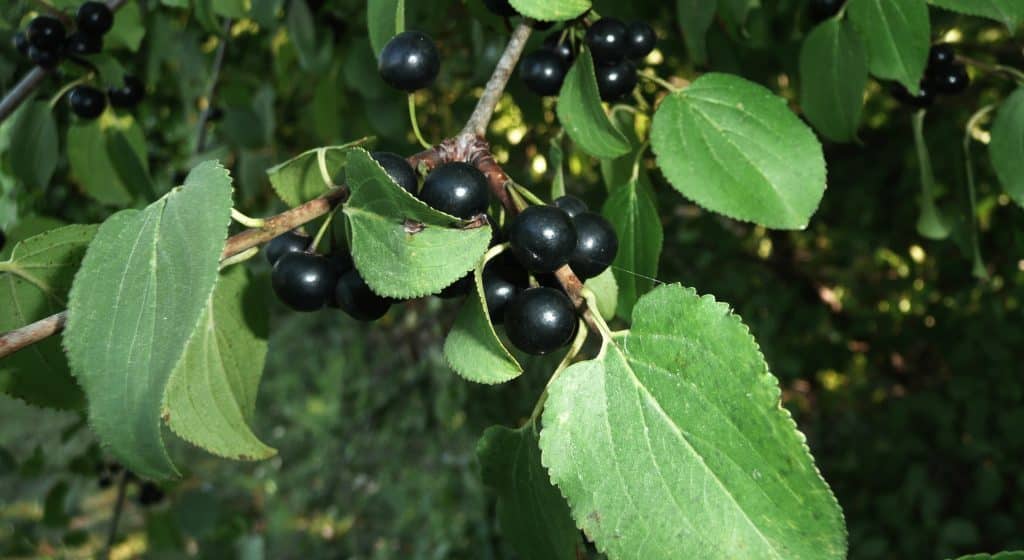 This forms into a large shrub or tree up to 25 feet in height. Common buckthorn twigs often have thorns at their tips, between the terminal buds. Branches are dotted with light-colored vertical raised marks. The bark is brown to gray and peels with age. The inner bark is orange.

It is the first to leaf out in the spring and the last to loose its leaves in the fall.  Birds spread buckthorn seeds by eating its berries.  It emits a chemical called emodin into the soil which is toxic to surrounding vegetation.

If buckthorn is larger than 1½ inches, saw or clip the stems near the ground. To prevent resprouts, paint the cut stumps with glyphosate (Roundup®) immediately after cutting, being careful to avoid other plants since glyphosate kills all growing vegetation. The best time to use herbicide is in the fall when buckthorn is one of the few actively growing shrubs.

If plant is larger than 1½ inches, saw or clip the stems near the ground. To prevent resprouts, paint the cut stumps with glyphosate (Roundup®) immediately after cutting, being careful to avoid other plants since glyphosate kills all growing vegetation. The best time to use herbicide is in the fall. 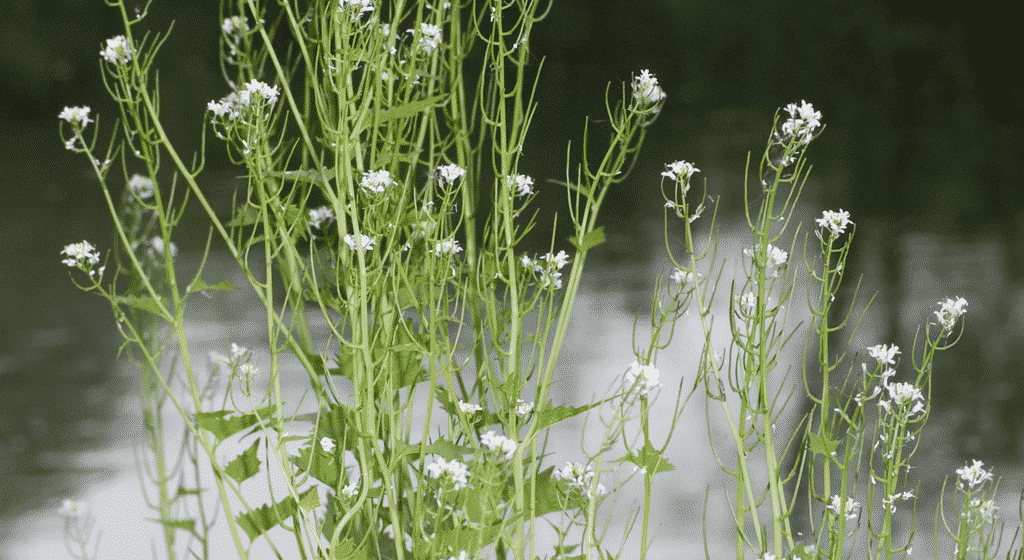 Garlic mustard is a biennial herb that grows 2- 6 feet tall. Lower leaves are kidney-shaped with scalloped edges. In spring, roots and new leaves smell like garlic, and small, four-petal white flowers appear clustered at stem ends, followed by long, skinny seedpods. This weed spreads by seed and can self-pollinate, helping it rapidly displace native plants along trails, in forests and on riverbanks, among other areas.

All parts of the plant, including the roots, give off a strong odor like garlic.

Control: In small infestations or sensitive plant communities – hand clip or pull seedlings, rosettes or flowering plants prior to seed set. Do NOT compost. Dispose of in plastic bags in the trash. 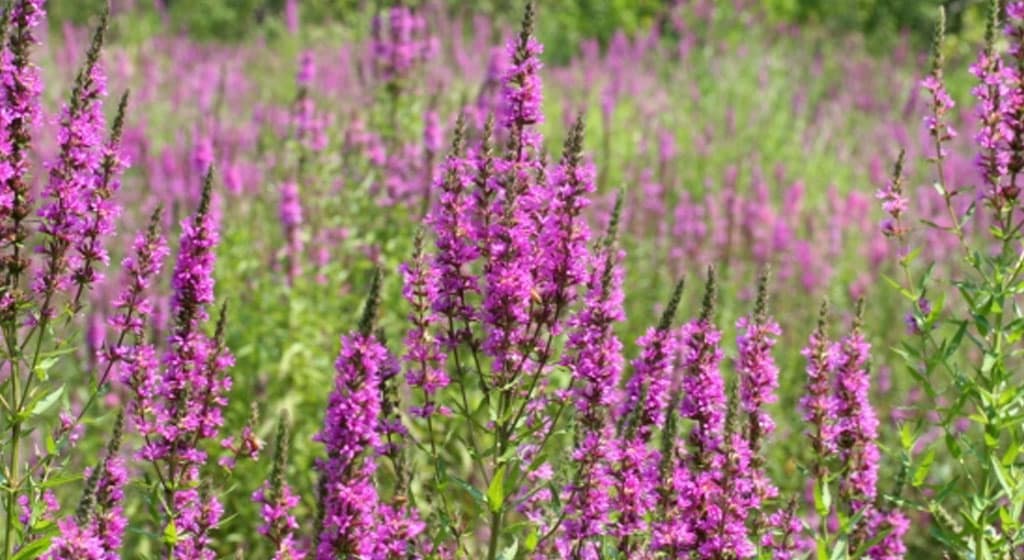 The purple loosestrife plant, also called garden loosestrife, can grow 3 to 10 feet tall with its woody angular stem. It is disease and pest free, and blossoms into showy purple spikes from late June to August. Dying flowers are replaced by seed pods between July and September. Each mature purple loosestrife plant can produce a half million seeds per year leading to its abundance.

Control: The best time to control purple loosestrife is in late June, July and early August – when it is in flower, plants are easily recognized and before it goes to seed. Once flower petals start to drop from the bottom of the spike, the plant begins to produce seed. Take great care so seeds are not shaken from the plant. At sites where plants have gone to seed, remove all of the flowering spikes first by bending them over a plastic bag and cutting them off into the bag. Further cutting of stems or pulling can now take place without fear of spreading the tiny seeds. 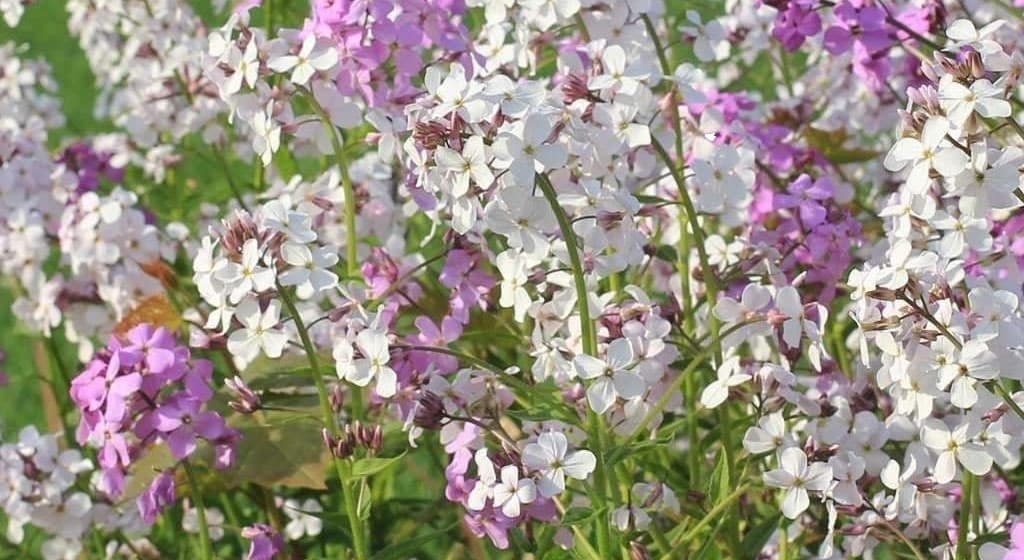 White in color, pink, or purple in color; 4 petals, borne in terminal clusters; fragrant, clove-like aroma in evening; blooms mid-May through July. Often confused with Native phlox (Phlox divaricata) which has five petals, rather than four.

Control: Locating and removing plants immediately before seed sets is the best way to prevent the spread of dame’s rocket. Do NOT compost if the plants are blooming as the seeds can still ripen and spread. Be sure to check the contents of “wildflower” seed mixes for this species and do not plant those that carry it. 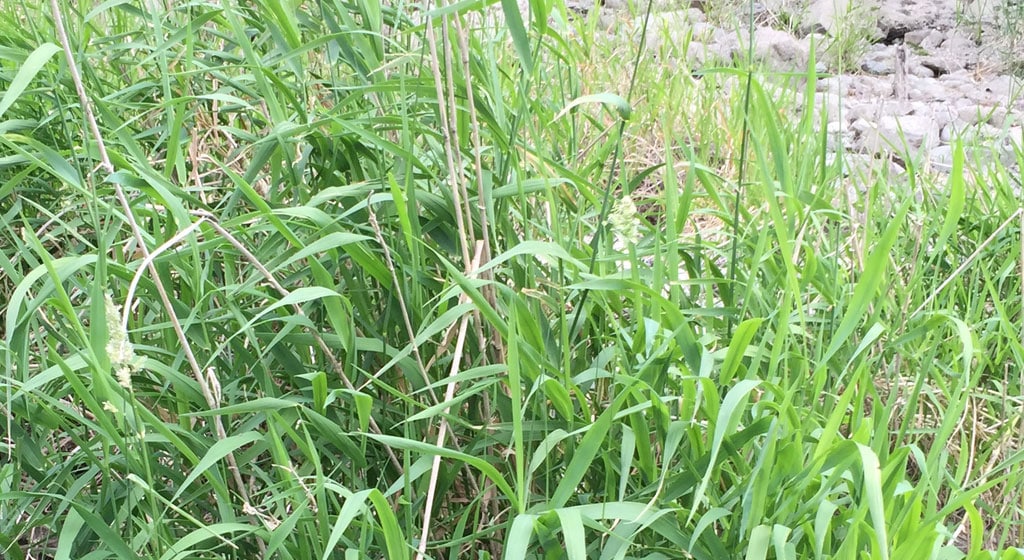 It is a perennial coarse cool-season grass that grows 2 – 6′ high. It is a threat to most wetlands and spreads by seed and well as rhizomes.

Control: Mechanical control can be done by mowing in mid-June and October to reduce seed production and encourage native species. If cut during the growing season, reed canary grass will have a second growth spurt in the fall, so multiple mowings per year are necessary. Small patches can be hand-pulled, dug with a shovel, or covered with black plastic for at least one growing season. Herbicide control can be done using glyphosate (Roundup®). If the plants are in or near a wet area, be sure to use an herbicide formulation approved for use near water. Preliminary research indicates that fall chemical application may be most effective. This invasive is tenacious – professional help is often advised. 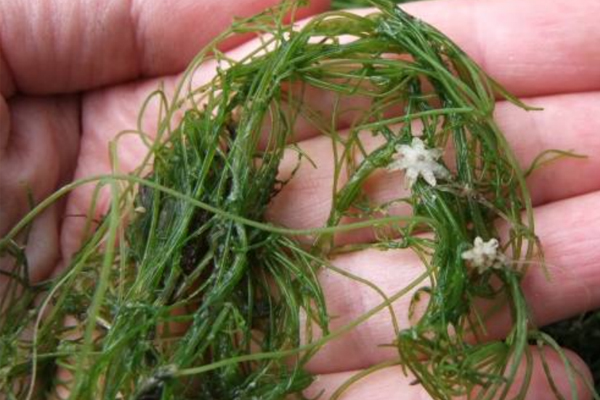 Invasive aquatic alga newly found in Illinois. In some areas of the US, it is known as a “lake killer”. Native to Europe and Asia, it can grow up to 7 ft tall anchored to sediment with clear filaments called rhizoids that resemble fishing line.

It is bright green and bushy with distinctive white star-shaped bulbils the size of a grain of rice and small orange spheres called antheridia.

It can form a dense carpet which overtakes the habitat and outcompetes native aquatic plants, providing unsuitable shelter, food and nesting habitat for native animals, as well as interfering with recreation and affecting property values.

Starry stonewort is primarily spread by humans moving water-related equipment from one body of water to another.

Control: Locating and removing plants early is key to preventing a massive infestation. Once it gains a foothold, it is very difficult to control. Mechanical removal has some limited success with smaller infestations. Chemical control is best left to professionals. Responsible water-related equipment management is critical – completely drain, dry and clean any equipment moved from one body of water to another. 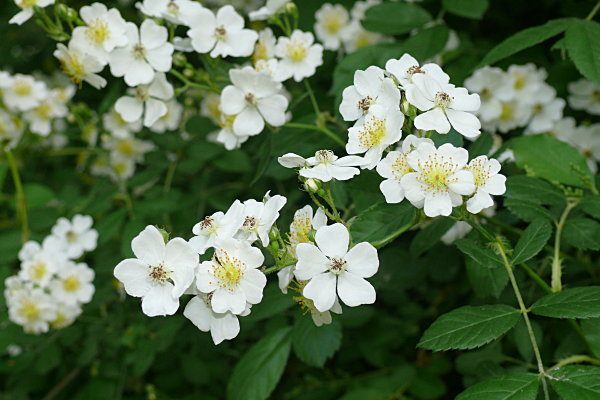 Multistemmed, thorny, perennial shrub that grows up to 15 ft. tall. The stems are green to red arching canes which are round in cross section and have stiff, curved thorns. Small, white to pinkish, 5-petaled flowers occur abundantly in clusters on the plant in the spring. Leaves are pinnately compound with 7-9 leaflets. Leaflets are oblong, 1-1.5 in. long and have serrated edges. The fringed petioles usually distinguish it from most other rose species. Fruit are small red rose hips that remain on the plant throughout the winter.

Forms impenetrable thickets in pastures, fields, and forest edges. It restricts human, livestock, and wildlife movement and displaces native vegetation. It tolerates a wide range of conditions allowing it to invade habitats across the United States. Native to Asia and was first introduced to North America in 1866 as rootstock for ornamental roses. During the mid 1900s it was widely planted as a “living fence” for livestock control.

Control: Cutting of individual plants is preferred to site mowing to minimize habitat disturbance. Various herbicides have been used successfully but, because of the long-lived stores of seed in the soil, follow-up treatments are likely to be necessary. Application of systemic herbicides (e.g. glyphosate) to freshly cut stumps or to regrowth may be the most effective methods, especially if conducted late in the growing season. 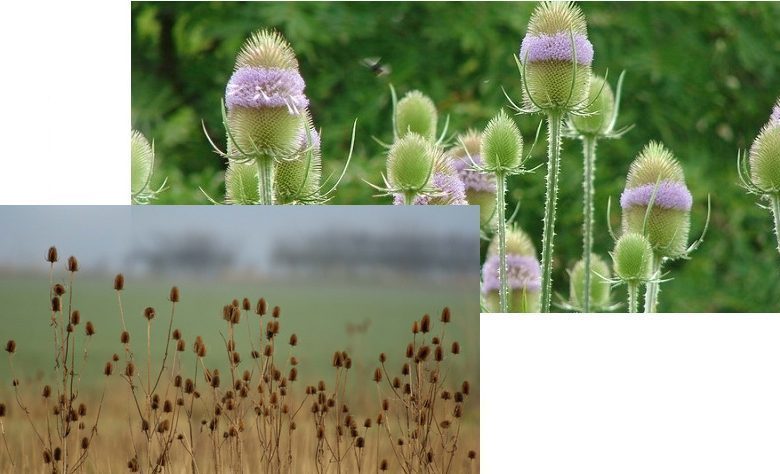 A biennial that starts as a basal rosette with short prickles at the midvein.

Favors disturbed sites such as roadsides, ditches, waste places, riparian sites, fields and pastures in most of the continental United States.

Primarily spread by wind, including the draft of passing cars and trains along roads and tracks.

Control: Mowing will NOT control this plant. Teasel can and will re-flower and set seed after mowing. Teasel MUST be sprayed or hand pulled. If not treated, one plant producing an average of 6,000 seeds per season, can generate over 3,000 plants. Multiply each of those 3,000 plants by 6,000 seeds =
18,000,000 seeds by the second generation of teasel. Check out this IDOT guide to teasel control.

A perennial wetland grass that grow 3-20 feet tall that invades moist habitats such as lake shores, river banks, ponds, marshes and roadside ditches. Leaves are flat and green to grayish-green. Flowers grow as dense feathery clusters at the end of each stem. It can tolerate a variety of conditions and quickly establishes via extensive rhizomes taking over underground. The plant can recover from cutting or burning. It creates a monoculture, robbing fishe, plants and other wildlife of nutrients and space, blocking access to water and creating a fire hazard.

Control: An integrated management approach seems most effective, including an initial herbicidal treatment followed by mechanical removal (cutting or mowing) and possibly a controlled burn. This is repeated annually. This invasive is tenacious – professional help is often advised. 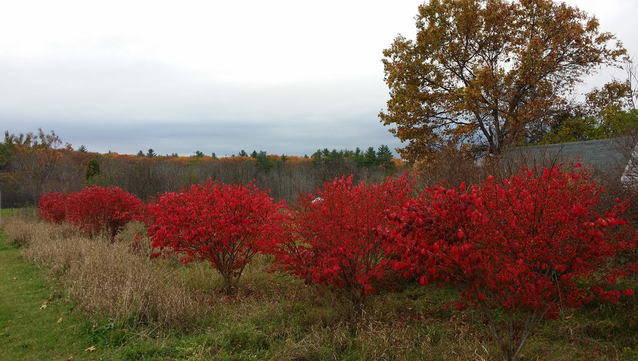 Native to Asia, a deciduous shrub, up to 20 ft. in height, which invades forests throughout the eastern United States. Two to four corky ridges often form along the length of young stems. The leaves turn a bright crimson to purplish color in the fall.

Can invade not only a variety of disturbed habitats including forest edges, old fields, and roadsides, but also in undisturbed forests. Birds and other wildlife eat and disperse the fruit. Once established, it can form dense thickets, displacing native vegetation. Was first introduced into North America in the 1860s for ornamental purposes. This plant is still sold and planted as an ornamental.

Control: There is no know biological control for burning bush. Seedlings up to 2 feet tall can be easily hand-pulled, especially when the soil is moist. Larger plants
and their root systems can be dug out. An extremely labor intensive method to prevent spread is to trim off all the flowers, thus eliminating seed production. Larger shrubs can be cut. The stump must be ground out or the re-growth clipped. 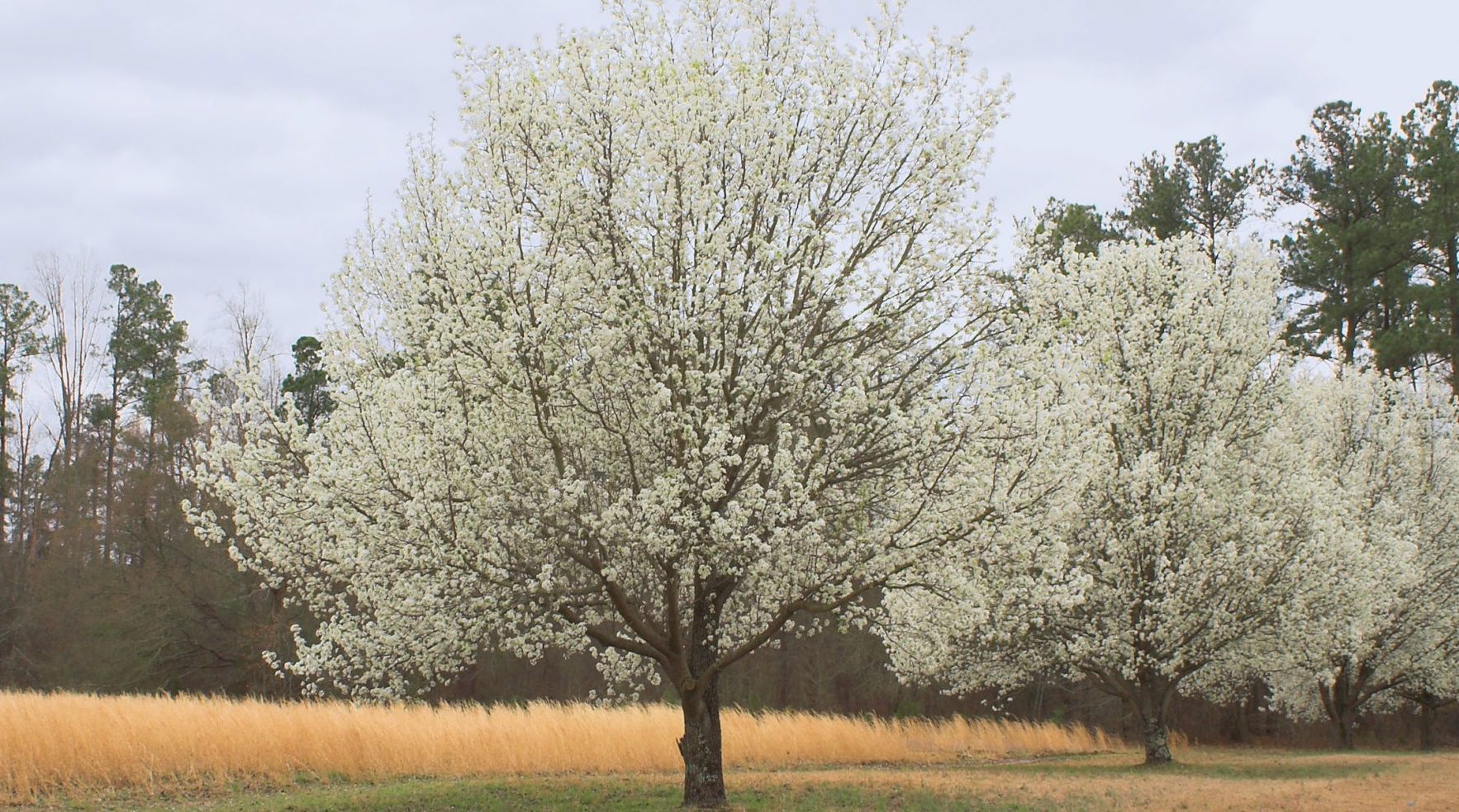 Deciduous tree native to China that can grow up to 60 ft. (18 m) in height and 2 ft. (0.6 m) in diameter. Flowering occurs early in the spring (April to May) before the leaves emerge. The flowers are 1 in. wide, showy, malodorous and white. They have been widely planted throughout the United States since the early 1900s as an ornamental. Can quickly establish dense thickets by self-seeding. The trees leaf out early in the spring relative to other species and the thickets shade out native understory plants. The density and thorniness of the thickets can also impact wildlife movement in invaded areas.

Control: Can be pulled or dug up as long as the roots are completely removed. Incomplete removal leads to vigorous regrowth from cut stems and stumps, so methods that top-kill plants, such as prescribed fire, grazing, and stem cutting, are unlikely to provide effective long-term control as stand-alone practices and could potentially increase the density of infestation.  Foliar, basal bark and cut stump herbicide treatments are effective. With any treatment, it will be necessary to monitor for and treat regrowth and new seedlings in subsequent years. Seeds can remain viable for at least 11 years.